ONLINE VENUE OF THE DARK LORD OF THE CHURCH OF NEUROTOLOGY

(as seen on Saturday Night Live)

Check Back at www.meepthorp.com for updates on The "Secret Vaults": A new book coming soon! 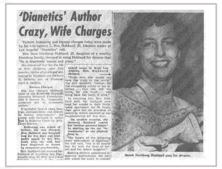 Episodes of "Scientology and the Aftermath" series (hosted by Leah Remini on the A&E cable network),

are intended to provoke viewers into asking questions, such as: Where does the described inter-family abuse

in the Church of Scientology come from? Like other policy aspects of similar "cult" organizations, a follow-up could be:

Is horrific inter-personal abuse a reflection of Scientology's founder, L. Ron Hubbard, himself?

in mid-May and by the first week of June 1950 it had already started its climb onto the best-seller charts for Los Angeles.

Informal practitioners sprouted across the nation, and formal Dianetics organizations were established on the coasts.

Looking back, this appears to be a result of a canny and manipulative campaign by insiders within the science fiction

community (who used "Amazing Science Fiction" magazine as a promotional vehicle), combined with exploitation of sales

data compiled by the Los Angeles Times (which sampled only six local booksellers, during the comparatively slow "Summer"

season of 1950).  For comparison, a 1990 article is also linked, alleging similar attempts at manipulation of book sales charts

by agents for sales representatives of other titles by L Ron Hubbard.

Image of front page of 1990 article

followed by numerous offers of Dianetics counseling from rival existing therapists such as hypnotists. This was followed by some bold journalistic tactics by Time Magazine, including phoning advertisers and asking what they thought about their own practices, interviewing officer manager Frank Dessler as if he was just another satisfied customer from the general public, and publishing it in a section titled "Medicine." Local ads continued, and at one point, famed science fiction writer A. E. VanVogt was introducing Dianetics in a rented room in mid-Summer at a Junior High School!

The peak of the Dianetics trade was in mid to late August 1950, riding the coattails of small display ads for Hubbard's own appearances at the time.

Before a large crowd at the Shrine Auditorium on August 10th, Hubbard famously tried and failed to demonstrate a Dianetic "Clear" while on stage.

Auditing classes at the Los Angles Hubbard Foundation then followed, starting on August 15th. These appearances led to the first significant

a series of articles within a smaller Los Angeles newspaper from Sept 6th to Sept 9th.

By October 1950 ads promoted Hubbard's appearance at a major local department store, and then at a series of Dianetic "Forums" held at the site

of what is now the Fonda Theater, at 6126 Hollywood Blvd. in Hollywood. Local book columnists were apparently confused by the popularity of Dianetics and offered some bemused criticisms. The official Hubbard Foundation tried to make sales with conventional ads for training courses

for auditors, where independent providers had already staked out more dramatic claims of "viagra-like" benefits from their Dianetic practices.

(We can speculate these circumstances may have led to Hubbard's later condemnation of newspapers, who he called "merchants of chaos," psychological therapists, whom he characterized as working in an "Industry of Death," and of market competitors, whom he labelled "squirrels")

Hubbard responded by diversifying his message of benefits from Dianetics, including a PR claim that his daughter Alexis was the first "dianetics baby" (who was carefully shielded during the pre-natal period from any kind of loud noise, bump or parental talk lest this produce an "engram").

Result: the baby talked at three months, crawled at four, and was free from "phobias" as reported in late October 1950 in the Oakland (CA) Tribune.

Sales finally slowed by December 1950, when Hubbard's "child care" advertisements were followed by news reports of Judge Holaday's engram, as

he sentenced L. Ron Hubbard to jail (on the charge of endangering his infant child left unattended in his car), an action that was then suspended.

Pushback from professional book reviewers had also started to appear. The Sunday Book Review of the New York Times was

said to be the first major medium to review Dianetics, and the July 2, 1950 issue featured specific criticisms by Dr. Rollo May.

About this time, Hubbard hired an agency professional to handle his press relations.

"Barbara Kaye" later described her work and personal relationship with Hubbard in a 1986 interview.

Link to 1986 interview with "Barbara Kaye"

Allowing comments critical of Dianetics to stand was not a position to be tolerated, and L. Ron Hubbard himself replied to the

New York Times in the following month. In part, LRH accused detractors to Dianetics to be motivated by their own economic interests.

More formally, the psychological community voted to oppose the use of Dianetics procedures by lay practitioners, notably in a critical article published September 9th, 1950 by the New York Times.

National criticisms of Dianetics, including actual protests within the Science Fiction community, were also noted along with (claimed) sales figures

in a series of columns from the prominent national bookseller's trade publication, Publisher's Weekly in June, July and September 1950.

These publications coincided with reappraisals by L. Ron Hubbard.  At that time L. Ron Hubbard was starting on his second Dianetics book, which he wrote "was to have shown how the Communists used narcosynthesis and physical torture and why it worked as it did. I was working on a technology of psychological warfare to present to the Defense Department"  The book was later released with "Science of Survival" as its title.

LRH had been lecturing frequently, advocating in his sessions for the abuse of "GUK cocktails" (made with the stimulant benzedrine)
so fellow practitioners could reach his "Dianetic reverie," along with discussions of "demon circuits"

That sort of malpractice led co-founder Dr. Joseph A. Winters to resign from the Dianetics Foundation, where "huge doses" of GUK were

being advised, and where he observed cases of patients not going "clear" but instead going insane. Casaulties included his intended successor, Dianetics Medical Director Rowland Walker, a 41 year old physician who suffered a "siege of terrible nerves" in association with Dianetics processing, and who later died of coronary thrombosis in Dr. Winter's home. (Not only was Dr. Walker the first verifiable Dianetics death,

his wife Margaret, mother of two children, was arguably another victim. After spending years in an asylum, she shot herself).

Click Here for link to notice of Dr. Walker's death

Click Here for link to notice of Margaret Walker's death

LRH began to spend his income streams freely, including quick purchases of an upscale home and a large historic downtown property.

This led to practical complications, as LRH's legal status in 1950 as a "bigamously-married deadbeat-dad" arguably exposed his assets

LRH reportedly declared that he no longer wanted to live as an American husband, and he turned his focus to his wife.

Sara Hubbard, LRH's partner during the writing of Dianetics and the mother of his newborn, reportedly became the latest subject for his

these incidents in a cautionary letter about LRH's "paranoid schizophrenic" mental status to the national Dianetics Foundation in late February.

This amplified alarming reports from other regions. The national office of the Dianetics Foundation was sued in mid-January 1951 by the

State of New Jersey for a criminal charge of operating a medical school without a license. Reports from the San Francisco - Oakland area, where Hubbard had traveled to visit his attorney Howard I. Paulson and to lecture in late September, escalated from discrediting to life-threatening.

In the face of critical questioning by real-live journalists at the Chronicle,  Hubbard had already publicly disavowed claims of an equivalence to the "discovery of fire" in the foreword of Dianetics, by attributing them to his publisher Arthur Ceppos (who in turn stated Hubbard was "guilty of a number of errors in judgment"). Then there was the first public report of a casualty directly tied to Dianetics, a murder-suicide involving an auditor, in early February in the university town of Berkeley.

Already overdue on a promised delivery of the follow-up book to Dianetics, pressures were building on Hubbard and the Dianetics Foundation.

L Ron Hubbard, author of a book he subtitled as "The Modern Science to Mental Health," now exhibited signs of an overt psychosis in public.

Just a day after news of the Dianetics crimes could be learned, Hubbard authorized a press notice intended to take empirical practices of medicine to a lower level, by rebutting state criminal charges with a proposal to enroll selected neurotics in what he termed to be a "duel" with psychiatry.

Circumstances then only got weirder. This preceded events which resulted in a series of unenviable Los Angeles area headlines tied to L. Ron Hubbard and his "Dianetics" movement for much of 1951, starting with a notice datelined February 26th.

Arrangements were made for LRH's partner (ex-felon Frank Dessler) to "borrow" $5000 from famed writer A. E. Van Vogt (a debt never repaid),

then LRH flew to Chicago (to be declared "sane" by a doctor) and then to New Jersey to settle affairs at the national Dianetics office there.

LRH, on probation for child endangerment, risked engrams by having the infant taken from its mother and driven 2500 miles under a false name.

At the national office, LRH initiated an informal purge by informing on some members of Dianetics for being "Communists" to J. Edgar Hoover's FBI.

Click Here for LRH Letter to FBI, Page One

After accusing Sara of having injected a "hypnotic solution of codium pentathol into his eyes with a hypodermic needle in his sleep for the purpose of subjecting him to her supposed hypnotic powers," LRH continued to flee local press reporting, taking the child with him while living on the run.

Sara formally filed for a divorce on April 23, 1951 in Los Angeles. The headlines, in morning and evening editions, were sensational.

Letters soon followed this coverage, including one from LRH's first wife, and another from L. Ron himself!  Famed war hero Arthur Wermuth,

working as a marshal, located LRH back in the states, this time in Wichita, Kansas. A PR counter-attack accompanied court actions there,

as a Kansas newspaper reported that "the whole thing is a plot rigged up by the enemies of dianetics to either destroy it or control it"
in a quote attributed to Charles Leonard, PR Director for the Dianetics Foundation. Almost mercifully, affairs were set in order in June 1951.

only appeared after his death, when participant Richard DeMille recounted his memories of this episode (in an 1986 interview by Russell Miller).

Meepthorp thanks University of California archives for assistance providing some of the above articles.